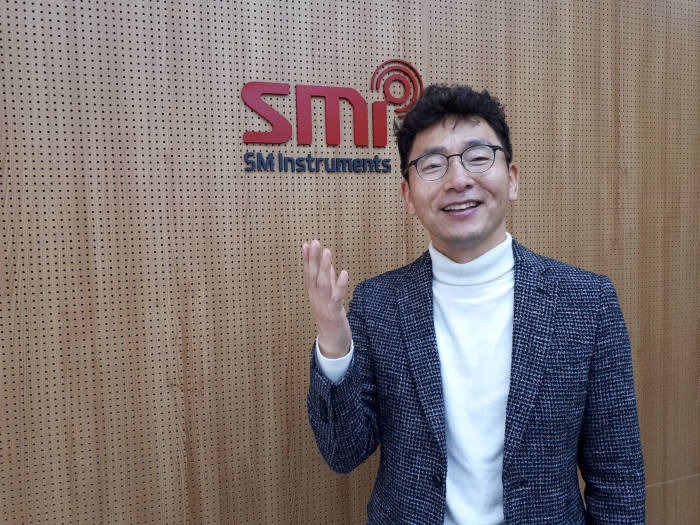 "We've developed and released the world's smallest device, which looks for gas leaks and electrical discharge risks, at the risk of corporate fate. After the first step in making the product, I'm going to compete with the giant dinosaur company and make it known to the world."

SM Instruments has launched the world's smallest and smallest related device, BATCAM 2.0. It has implemented a device that is only 237mm with ultra-small precision machinery technology (MEMS) sensor. It weighs only 1.2 kilograms but has excellent performance. It measures ultrasonic waves by embedding more than 100 high-sensitivity microphones and captures the location of leaks, and has better performance in detection time and number of detectable gases than conventional chemical and optical equipment.

Market response is also good. CEO Kim said on the 4th, "Korea's large oil refinery and 10 plant companies and institutions have expressed their intention to purchase products. The power plant is soaping more than 7,000 points (P) of pipes during regular inspections to detect leaks, but using BATCAMs is drawing attention from the industry as it can greatly shorten the process that used to take at least a few weeks."

Kim has spent 4 billion won over the past three years on research and development for BATCAM. It has made significant investments with the aim of making products that are used in a wide range of fields, away from the past when it focused on providing noise-related solutions to companies. 4 billion won is equivalent to SM Instruments' sales this year.

Based on this, the company plans to focus on promoting its BATCAM 2.0 product and corporate capabilities to the world next year. It is focusing on preparing to enter the global market this year. In order to enter North American market for methane gas detection with Chinese electric arc inspection market, it is currently discussing with local companies about its supply.

"Our market is important, but we want to enter the world and compete with big companies like Fluke," CEO Kim said, expressing expectations, saying, "Although it is still too early to be sure, BATCAM will be able to transform the profit structure and increase significant sales."

It will also make efforts to develop additional products. Kim has been leading R&D within the company on his own. Kim majored in mechanical engineering and has built a career at large companies and the Korea Aerospace Research Institute. He has been active in the field of noise and vibration measurement. That much, I know the importance of R&D. CEO Kim said, "We are planning to develop portable BATCAM in a fixed manner and increase our response solutions to suit the situation," and added, "We are still maintaining R&D investment levels at around 20% of sales." I will continue to spare no investment and efforts," he said.