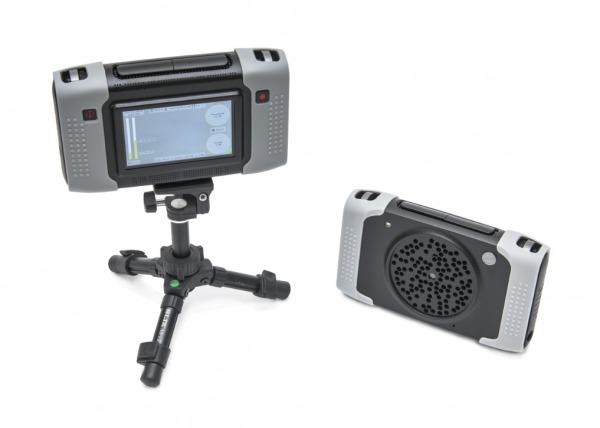 SM Instruments, which specializes in sound cameras, announced on the 25th that it has developed its own portable ultrasonic camera called BATCAM 2.0 (photo). Ultrasonic cameras are industrial cameras that can measure ultrasound that is not audible to humans and take pictures of gas leaks and electrical discharge in real time. It is a principle similar to that of thermal imaging cameras filming thermal images.

112 high-sensitivity microphones attached to the BATCAM measure ultrasonic waves. The measured signal is converted into an ultrasound image in real time through an analysis technology developed by SM Instruments. Images can be viewed in real time on the rear display. It can also be measured from a long distance, making it easier to check for short circuits such as insulators or transformers that fall high from the ground.

It is characterized by being small and light. The BATCAM uses ultra-small precision machine technology sensors. It has been reduced to about 23.7 centimeters wide and weighs 1.2 kilograms, a level that can be carried. "It is the world's smallest and fastest-analyzed ultra-small camera," said an SM Instruments official.

Kim Young-ki, CEO of SM Instruments, said, "It is a product that can greatly improve the existing work method that used soap bubbles to check gas leaks," and added, "We will launch the product in January next year to target not only domestic but also overseas markets such as China."