SM Instruments has developed a portable ultrasound camera
Pre-detection of electric arcs and gas leaks has high safety and economic feasibility
"In the beginning, we tried to change our dependent business structure independently." 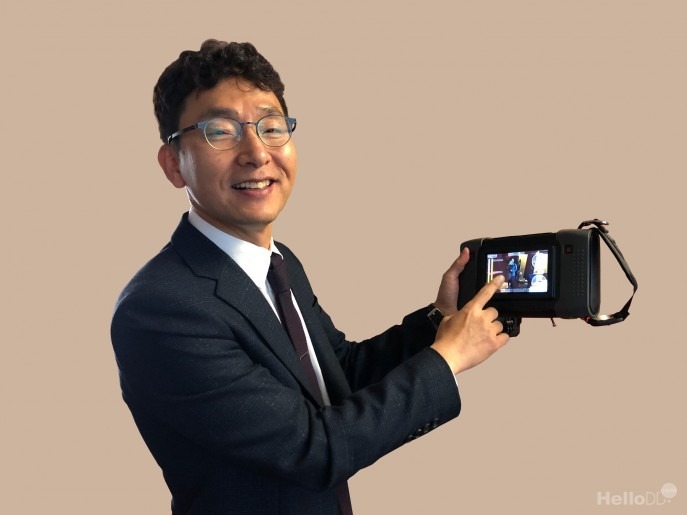 "Do you see the wires on the telephone pole here? There's a slight electrical arc."

On Wednesday, near Mannyeon-dong, Seo-gu, Daejeon. When Kim Young-ki, CEO of SM Instruments, lit a portable ultrasound camera the size of a note on a telephone pole, an electric movement was detected in blue on the screen. Ultrasonic cameras, which were mostly used in hospitals, have begun to be used in gas and electric safety areas. It is through a portable ultrasound camera developed by SM Instruments, a company specializing in sound cameras in Daedeok Special District.

"Through ultrasonic cameras, we can prevent gas leaks that can be harmful to the human body or lead to disasters, and check fine electrical arcs that cause forest fires," CEO Kim said. "It is a groundbreaking camera that can enhance safety and economic feasibility by detecting gas leaks in advance at power plants, petrochemical plants and semiconductor plants."

Until now, in order to inspect gas leaks and electric arcs, a worker has put on a headset and placed an ultrasonic sensor on each part of the meter. Afterwards, he relied on a meter reading for the fine sound delivered to the operator's headset. Basically, it was difficult to read if there was noise. Sensors with conventional chemical methods could be detected only when a certain concentration of gas was accumulated in the air.

SM Instruments developed a camera after detecting that gas leaks and electric arcs produce ultrasonic components higher than audible frequencies (frequency areas that people can hear). Ultrasonic cameras are not related to noise or airflow and can detect immediate electrical and gas leaks regardless of gas type. SM Instruments has developed a product called 'BATCAM 2.0' that contains these characteristics.

◆"In the beginning, we tried to change our dependent business structure independently."

Kim was a scientist who majored in mechanical engineering. He had been a researcher at LG Electronics and the Korea Aerospace Research Institute since the early 2000s before starting his own business in 2006. In the early days, he also carried out tasks for government-funded research institutes. It has since developed sound cameras that shoot sound and delivered them to Hyundai Motor, Mercedes-Benz, BMW, Audi and Toyota. It used sound cameras to conduct noise and vibration tests that occur during mass production of cars.

"In the beginning, it served as a service organization that performs government research institute tasks," CEO Kim said. "We have developed several products since then, but we felt the need to develop competitive products as we were affected by the situation of our customers." "After analyzing our competitiveness at the time, it was a sound analysis device," he added. "We developed our own sound cameras from 2013 and released our products." It transformed the business structure with dependencies into an independent form.

◆"Although it is difficult to secure manpower, we aim to sell 200 units domestically and 150 units overseas next year."

BATCAM 2.0, which was developed this time, uses 112 high-sensitivity microphones to measure ultrasound. Measured signals are converted into ultrasound images in real time through self-developed analysis technology. Its competitors are in the United States and Germany, and there is little technology gap.

In particular, ultrasound signals generated by electric arcs can also be shot in real time using ultrasonic cameras. It can be easily determined by shooting insulators with fine defects. Measurements can also be made from a long distance to check for short circuits such as insulators and transformers that are high from the ground. It can only be detected if more than 50cc of gas is released per minute.

There are a total of 24 SM Instruments workers, with about 18 R&D workers. It also developed BATCAM 2.0 independently. CEO Kim said, "The most difficult thing in the process of technology development is to secure manpower," but added, "The goal is to sell 200 units in Korea and 150 units overseas by launching full-scale products from January next year."