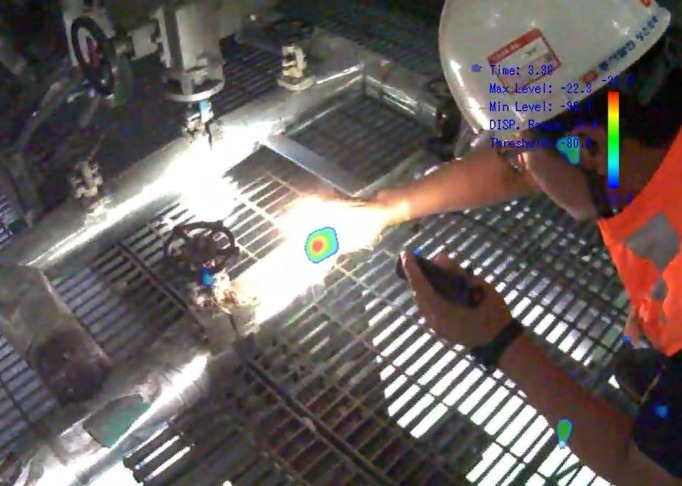 A worker is checking for gas leaks with a portable ultrasonic camera. [SM Instruments offered]

A technology has been developed to measure sound to prevent ultra-small gas leakage accidents. SM Instruments, a company specializing in sound cameras in Daedeok Special Zone, announced on the 20th that it has developed and released a portable ultrasound camera that detects the risk of gas leakage or electrical discharge.

The BATCAM 2.0, which was developed this time, drastically reduced its size (237mm) by using a digital ultra-small precision machine technology sensor and can be carried at 1.2kg.

The product uses 112 high-sensitivity microphones to measure ultrasonic waves and the measured signals are converted into ultrasonic images in real time.

In particular, ultrasonic signals generated by electric arcs can also be filmed in real time using ultrasonic cameras, making it easy to determine minute defective insulators through filming. Measurements can also be made from a long distance to check for short circuits such as insulators and transformers that are high off the ground.

Since ultrasonic cameras are measured using sound, gas leakage can be detected immediately regardless of the type of air flow or gas around them.

SM Instruments has already completed performance verification at domestic power generation companies, chemical plants, and semiconductor plants, and has been recognized for its excellent performance after conducting comparative tests with products from competitors.

CEO Kim Young-ki said, "We will be able to prevent gas leaks that can be harmful to humans or caused by disasters in advance and provide a breakthrough in the inspection of fine electric arcs that can lead to forest fires. We will first target the Chinese market through an international exhibition of electric power facilities in Shanghai, China."

It's like taking a picture with a phone, holding an ultrasonic camera and detecting a 'gas leak' [Source: HelloDD] A Company in Daedeok Special District Released a Portable Ultrasonic Camera that Detect Gas Leakage and Electrical Arc [Source: DaejeonIlbo]
List Write